…and the City of Chicago Rugby Football Club had been playing for about a year by the time Dick Smith joined in the fall of 1964. A young lawyer from the University of Virginia named William “Hawk” Walker, along with Mike Bansley, Peter Boland, Sandy Campbell, Terry Ellis, Pat Halperin (who still turned out for the Lions in 2002) and George Kearney, had formed the initial team and were getting beating regularly by 40 to 50 points by rivals such as the University of Illinois and the University of Chicago.

Dick then initiated some major player recruitment in the spring of 1965 and established a tradition that would stay with the club to the present day—”interesting characters” such as John Bellino, David Blears, Mike Flahive, John Rood and Bill “Thunder” Thornton were all recruited and formed the core of what was to become the Chicago Lions.

The Lion is Named and Starts Stirring… 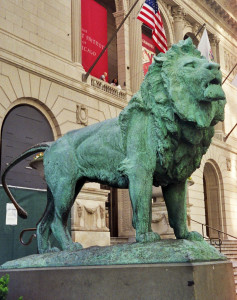 The club adopted the name in recognition of the the pair of “Colossal Lions” (sculpted by Edward Kemeys in 1873) which now stand outside the Art Institute on Michigan Avenue. John Bellino played for The Chicago Spiders and the club had to fight to get the Lions name.

The kit came from the great New Zealand All Blacks team with all black with white collar and two white hoops atop the socks.

As a gesture of goodwill to any visiting team that the Lions play, they are presented with a bronze replica of one of the lions (they are different), the idea being that the second lion is given to that team when the club visits them in their home country. It can obviously work the other way when the Chicago Lions visit a team abroad for the first time.

To date, there have been over 60 teams honored with this tradition including:

The Purchase of the Clubhouse 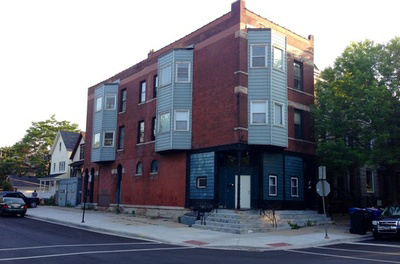 Ed Kane was the major force behind the purchase of the old “School Street Clubhouse”, located at 1801 West School Street on the north side of the city in 1981.

Until the Lions opened the North Park Tap bar in December of 2000, this served as the focal point for all socializing, entertaining and reception place for the club for many years.

Pulling on the Black 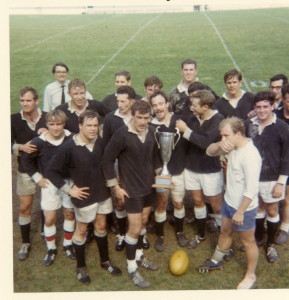 The traditional playing strip changed for two years in 1998 for the first time since 1964 with the advent of the National Super League, but have since returned to the original design. The Super League shirt had a black and white design, the shorts and socks remained the same.

The Chicago Lions have won 16 Midwest Championships, starting in 1966 with the first Mid-America Cup, in 1967 with the second, culminating 32 years later in 1999 with it’s last one. The Cup was disbanded in 2000.