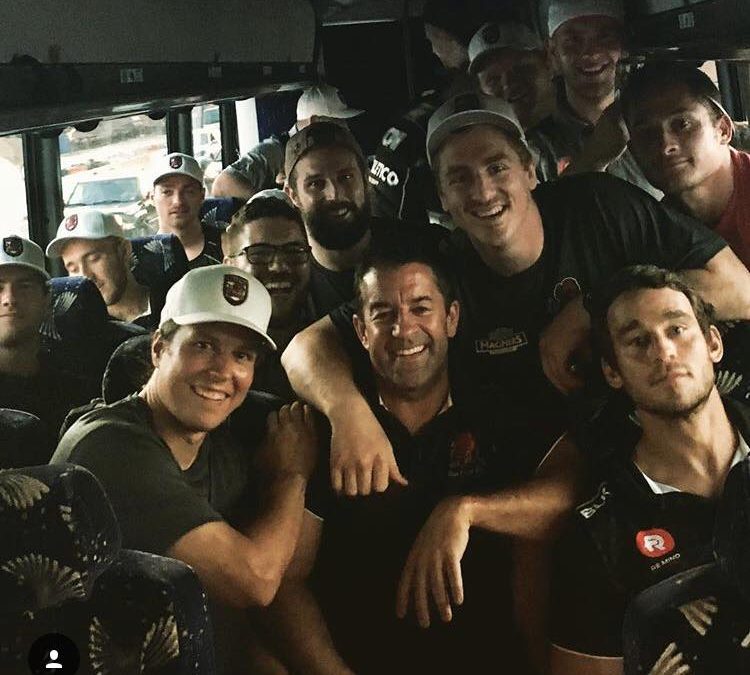 Last week, as the Lions were preparing for a regular-season test against Metropolis in Minneapolis, I was fortunate enough to be able to sit down with Patrick O’Reilly during the team’s training session. We talked about his time playing rugby and being a member of the club. I recall my first encounter with Patrick, early in my first season with the Lions. It was apparent to me from the start that this was a guy who cared very much about this club and the players. Over my tenure here (since 2012) Patrick has been involved in a huge way, and I believe he is one of the big reasons that we’ve earned the successes we have over that time, and before.

Prior to his departure, I wanted to pick his brain about some of the general aspects of the Chicago Lions. Joined during the interview by Lions club President Jeff Simon, the following is our discussion:

Wagner: When did you first start playing rugby?
O’Reilly: “Believe it or not, it was 1987. It was in Duluth, Minnesota… it was cold. I played wing and had no idea what I was doing. They threw me the ball and I went down the sideline and the snow was about knee deep so I had to high-step it the whole way. I scored and the worst part was they made me do a Zulu. And they let me keep my socks on.”
Patrick then went on to play at St. Cloud State, and after that for Metropolis in Minneapolis for three or four years. He then moved to South Bend, Indiana and played for South Bend (now called Michiana).

Wagner: How did you start playing rugby with the Chicago Lions?
O’Reilly: “(In South Bend) I got know a guy by the name of Adam Miller who moved here and… I knew I wanted to be in Chicago. And when I moved here for work he asked if I wanted to play. Everyone knew who the Lions were and I said I’d give it a go. That was in 2000, that was when I started running around with the Lions. I only played one Super League game the whole time, and I didn’t start. We were very desperate. We had three different teams. We practiced at that park off of Irving (Revere Park) and we’d have a million guys out there. I played scrumhalf.”

Wagner: What is your greatest Lions on-field playing moment?
O’Reilly: “Probably those two seconds I stepped on the field for Super League (laughs). I was pretty geeked. I remember the training before we went to Belmont (Shore) in 2007 (for the Super League Final), that was insane. I remember, pretty vividly, when we played Team USA before they played England ‘A’ or someone. And we did really, really well against them. I mean they beat us, but we held our own for a long time. My favorite part of the years is LVI (the Las Vegas 7s Invitational, which the Lions won in 2010 and 2017). My second favorite is going to (7s) Nationals, just because of the environment.

“One of the coolest things I think I was a part of was the loss to Belmont in the 7s Final in San Fran (in 2012). The crowd was big, we had a lot of Lions Alumni. We had just beaten Seattle and that was something, because they were favored. And not just against us, they were favored (to win the tournament). Just the passion that… I’ve never seen guys give as much as they did on the field in that game, it was amazing. And we lost to a better team. It was a good, good game.”

Wagner: What is your greatest Lions off-field memory?
O’Reilly: “Off-field, just, I don’t know. I like the (player/alumni) weddings, just because we all get together. When you do the weddings, or when you do the banquet-type stuff, it seems to transcend the generations. You’ve got rookies that are 18 year-olds hanging out with a 50 year-old guy they’ve never met, just because they’ve got a Lions pin on. It’s just that shared experience that, unless you do it, you just don’t get it.”

Wagner: One of the things I want to talk a little about is your relationship with Keith Brown and his time here with the club. He set some of the principles that we are really taking and running with now as a club.
“Keith’s biggest thing was his passion. And Lisa, too. Lisa was more than just support, she was involved. And she knew how much time Keith took to do this. He liked being around (the club) and his deal was organization. When the Super League took over, he tried to eliminate as much as he could of the burden of players to do anything but train and play. Keith Brown was in the hospital and he asked me (to fill the role as President). When Keith was President, I was playing, but it was more doing like I do now. I was always involved off the field. I just like doing this because it helps everything run more smoothly.”

Simon: What would you say would be the biggest change you’ve seen since you started?
O’Reilly: “The level of play. The seriousness (with which) guys take it. (People) don’t understand the amount of time that these guys put into it. They’ll train a minimum (of) six days a week when we get to this level. The 7s guys go seven days a week because there’s a workout that’s required, that’s checked. There’s fitness tests. And even on Sunday when you get back (from a tournament), there’s a recovery session, there’s yoga. From when I started, I mean, I saw guys smoking at half time! The level of coaching. I mean look, we’re sitting here at a lit turf field. Look at the difference just in this organization.

“When I started we were training at Revere Park. It was basically some guy, more or less, with a candle (referring to the poor lighting at the park). And the field was… it was softer to play out in the street. But you had a lot of guys, a lot of passion. But now, we have a lit turf field, there’s, I don’t know, five coaches here. We get a trainer here. There’s film beforehand. They get film clips emailed to them. You’ve got bibs, and top of the line equipment. The partnership with Hope (Academy)… and Bob (Muzikowski)’s done a good job expanding that. The unspoken hero at Hope is Kevin (Drewyer). He’s part of getting the rugby program going. (Pat) Bolger stepped up (to coach Hope)… and they won a state championship.”

Wagner: Where would you like to see the club continue to go?
O’Reilly: “National championship. Two. And in order for that to happen, there needs to be support. I think the field is a big deal but I think the more we win, the more we’ll have support from Lions Old Boys. Involving the community more. One of the things I’ve always tried to do is be nice to everybody. And it helps. Be it the Griffins, the Riot, Metro. When we were going up to (7s) Nationals (in Minneapolis), for example, this year. Once we made it, Metro called us and said ‘You guys can use our field for free to train on’. We can have a swagger, you know, (but) there’s a difference between confidence and cocky. It’s building a culture, not only of winning, but a club culture. It’s an attitude that Aaron (Manheimer) instilled in his people that I’d like to see back. And it was ‘in my head, I figure nobody is going to do it, so I have to do it’. If we had all these guys that thought like that, and it is changing. The club was here before me, and it will be here long after me, and that’s got to be the mentality. And if (the players) can see it from me, hopefully that carries over. And it seems to, a little bit.

Wagner: What would your advice be to a new guy coming in to the organization?
O’Reilly: “Keep an open mind. You’re not as good as you think you are, you’re here to get better. No matter how good you are, you’re not going to be fifteen (players). You’ve got to become part of the team, the team does not have to become part of you. Once you know your role and you can play it, you’re not going to find a better bunch. When these guys fit in, which it doesn’t take much, or long, they’ll have your back for anything. And it goes across generations. And that’s also what we’re trying to build more of.”

Ever the club-man, I cannot say I was surprised by his responses. After all, for the last half-decade, these are principles that I have witnessed him both preach and practice. His love and care for the players means a lot to me, and I know it means a lot to the scores of teammates I have been blessed to know, play, and train with. Patrick is the kind of guy that, if it was within his power, he would do absolutely anything for you if you needed it, and never think twice about it. He has been a shining example of what it means to be a Chicago Lion. To carry yourself with honor and integrity, to train and play as hard as possible, and to never put yourself before the club.

Patrick and his family (Lisa, young Callan, and the fourth O’Reilly on the way!) will be missed dearly in Chicago and by the club. His presence has been a massive one, and his boots will be very hard to fill by his successor.

Patrick, words cannot accurately express the gratitude I have for your service to this organization. As long as I am here, I know I will do my best to pick up the torch you’ve carried for almost a generation and continue moving forward. I know there are dozens of my teammates and current club members who, because of your example, and because of what the Lions mean to them, will do the same.

It’s another #gameday weekend as the Lions Men h

A massive congratulations to Chicago Lions and @ru

It was 2 Lions rookies who really showed out yeste

#LionsWin It’s another double weekend for the Li