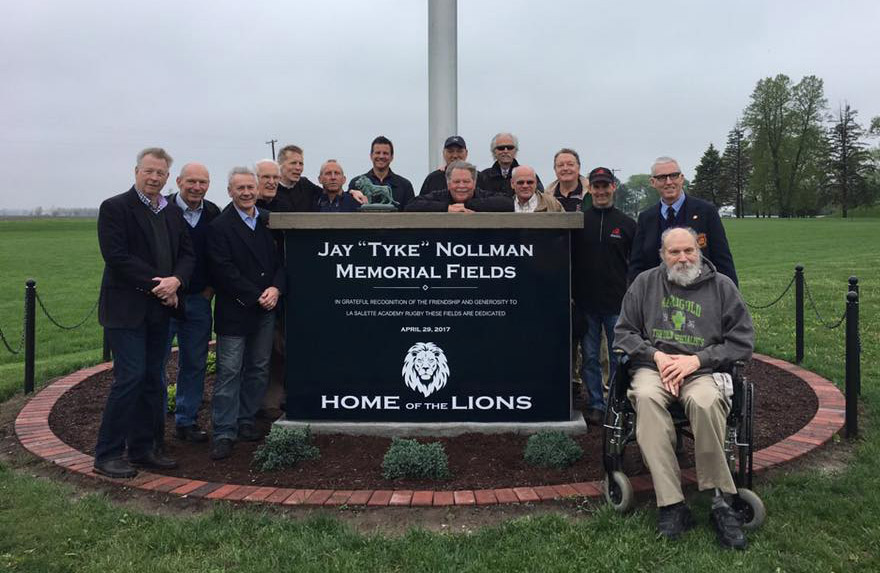 In April, a group of Chicago Lions attended a dedication ceremony at LaSalette Academy in Georgetown, Illinois. The ceremony marked the official dedication of the Jay “Tyke” Nollman Memorial Fields. The day’s event was capped off with an unveiling of the monument, flag raising ceremony and a number of speeches.

Tyke became involved with the Lions from LaSalette seven years ago. This school of 80 students are currently playing in the first division of Rugby Illinois and have been quite successful. The two main playing fields and one practice field all are regulation dimensions with 55 foot goal posts on each pitch. It was quite a setting, the rain and wind cancelled the game scheduled to play the Arlington Stallions, Paul Bergman’s and Vinnie LaPiana’s club.

The generosity of Tyke and his wife, Jane, are being felt in the rugby community not only here in Chicago, but downstate at this high school as well. We are proud to count Tyke as an alum of the club and wish nothing but the best to the La Salette rugby team!

A total of 14 Chicago Lions Old Boys attended the ceremony, it was noted that the significance of the 14 former players joining together to celebrate a great day with Jane and relatives.

Fourteen Chicago Lions were present, one space was left for Tyke.

On Saturday, April 29th, the Notre Dame de La Sallete Boys Academy in Georgetown, IL, dedicated their rugby pitch in honor of our late great friend, J. Tyke Nollman. I was part of a large contingent who headed downstate to commemorate this event.

Tyke was a stalwart, standup, ambassador of our great club, The Chicago Lions RFC. He dedicated his life to our success both on and off the pitch. He served as President of the Lions back in the late ’70’s and early ’80’s. In fact, he was at the helm when I first put the black jersey on. His attitude and professionalism embodies and permeates the club to this day. He is someone I will never forget!

Cheers to you, my friend.