Keith Brown: One of a Kind, and One of Our Own 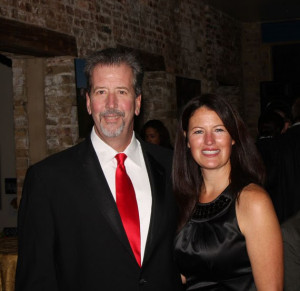 Keith J. Brown passed away peacefully on Wednesday, October 19, 2011 after a battle with Melanoma skin cancer. He was Executive Vice President at Klaff Realty, LP, a private Chicago-based real estate investment firm that specializes in the acquisition of distressed commercial property on a national scale. He was born in Chicago, Illinois on August 18, 1950 and is survived by his wife, Lisa Quinn, and two sons, Colin and Brendan. He also leaves behind a Black Army…

Keith was President of the Chicago Lions Rugby Club and a board member of the USA Rugby Foundation. Keith had served as President for five years, until this past August when he stepped down. He was instrumental in realigning the Lions when he first became involved as part of the building committee in 2005. At this time the Lions had assets in both the School Street Clubhouse and the North Park Tap. He spearheaded the group to consolidate and sell both using the proceeds to purchase an income producing six flat building on Chicago’s Northwest side. The rental units provide a steady income for the Lions as well as providing lodging for newly transplanted players to get their feet on the ground.

Keith was also the leader in securing the present playing pitch and clubhouse at our Lions for Hope Field in conjunction with The Hope Academy. His work with Hope Academy was monumental. I will be submitting a proposal to the Lions Executive Committee to rename the grounds Keith Brown Hope Memorial Field.

If one could describe Keith in a word, for me it would be “passionate.” As a true lover of life and all of its offerings, Keith made the most of the time given to him on this Earth. One look at his resumé would drop your jaw, his wit would make you smile, and his advice and guidance would inspire you. Yet, as the President of a rugby club, you knew he could throw back a beer or two and just be one of the boys, as well. The influence that Keith has had on rugby in the U.S.A. is immeasurable, and as a leader of lions, a mentor, a friend, a father and loving husband, Keith Brown will truly be missed. Here’s to Keith. – Matt Priest

It is quite likely that by the time you read this, you will have already heard everything I am going to say about Keith from the thousands of people aside from myself that he brought so much joy and levels of friendship to throughout his astounding life. It is also quite likely that as family members you knew these characteristics far better, deeper, and more intimately than anyone else who is now recalling them with such clarity and heavy hearts in his recent passing. Despite the fact that very little of what you are going to read will be new to you or surprising in any way, shape, or form, the words still need to be expressed to let you know how cherished Keith was to those who were able to spend even small amounts of time with him, but especially to those who were privileged enough to call him a mentor and friend during the time we were able to share together.

Perhaps more than any sport in the world, rugby brings an exceptionally eclectic group of men and women together to share their passion for the game and the pride in which they have for it. The rich and the poor, the young and the old, the seasoned and the novice – you will find every single one of these people and then some within every active rugby club throughout the world. And while the goals and passion for the game may be a shared commodity within a club, those two assets alone do not ensure there will be the type of teamwork, camaraderie, and mutual respect amongst the group necessary in order to create the kind of resounding success we all strive for in playing this beautiful game. In order for true success to be achieved and in order for a club to become more than merely the sum of its numerous and distinctive parts in constant motion you need a leader to unite each faction of the machine and teach them to play and be as one, both on and off the pitch…someone to teach the club how to become a real part of each other…someone to show what it means to care, to look out for, to enjoy, and to respect what each piece of the machine – no matter the shape, size, background, or perceived capabilities – contributes to the overall success and livelihood that can be attributed to the club for all its days to come.

Nobody with even the smallest knowledge of the Chicago Lions ever questioned who that person was within our club. Everyone knew who our leader was, who our visionary was, who our captain was in times of calm, in times of celebration, and times of choppy waters alike. The instant you met Keith Brown you knew you were in the presence of someone who’s vision and passion for the club and life itself was exceeded only by the reward he felt in bringing such care and friendship to each individual he encountered along the way. The moment you met him, you knew you were in the presence of a great man who had acquired knowledge of the lessons we all strive to pry from life’s handbook throughout our own journeys, and someone who was happy to share whatever he could to make you and the group you were a part of infinitely better than you could ever have been without him.

Keith had the unique and unmatched ability to make every single person in a room feel genuinely welcome to a group; to feel a part of something; to feel as though he was in fact someone who cared about what you brought to the table and someone who wanted to help you make the most of those talents, ideas, and qualities that make up the fabric of who you were. Keith was a unifier in every sense of the word; someone who was able to bring people from every walk of life together and seamlessly begin the transition from stranger to friend in the most heartfelt and sincere manner I have come to know.

Think for a moment about how many different people counted Keith as one of their closest and most cherished friends they had in their lives…think about how many people in Chicago and throughout the world honestly felt as though Keith was the person in their life that they admired most and held in the highest regard. Think again about how remarkable it is that one individual person was make so many people feel as though he was their rock, their mate, their partner, their buddy, their confidant, their voice of reason, their friend in every meaning the word has to offer. What I am describing is no small feat and should not be disregarded or understated. Achieving something like this in one’s life can only be accomplished by a person who values others over himself, someone whose empathy and compassion removes all room in his heart for greed and selfish desires; and the most difficult of all – someone who is able to put the good intentions he has stirring within his thoughts and his soul into real, tangible action in his every day life…

We are all extremely saddened by Keith’s passing. There’s simply no way to avoid that feeling, and no way to assuage the melancholy we have in thinking about the time spent with such a magnificent man who meant the world to the Chicago Lions and all those he came in contact with throughout his life. That said, in addition to that sadness we undoubtedly will feel for a very long time to come, so too are we inspired to live our own lives in his honor and take on those lessons he taught us about cherishing each individual that is already a part of our lives and those we will meet in the days and years to come as we continue on…about making the most of your abilities and talents professionally, socially, and domestically…and about taking the time to enjoy the life that you have with those you love whenever the opportunity presents itself – just as Keith did.

We’re all going to like this world a little less without Keith in it, and we are all better from simply knowing him. Cheers, to the best Lion I’ve ever known…and one of the best men I’ve had the pleasure to meet and learn from in this lifetime.

With love and respect,
Dennis O’Donnell

Congratulations to the Lions of the Tournament at

#LionsWin 7s gets off to a flying start as the Men

The Lions are officially #backinblack as the Women

Today's player spotlight features a player who was

With the 7s season getting underway we're highligh

It’s officially summertime in Chicago, and that